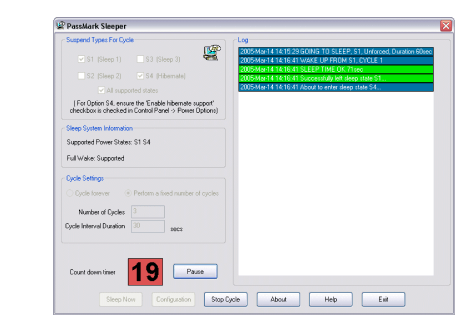 Sleeper is a small utility program developed by PassMark Software to help test the ability of PC systems to enter and recover from sleep and hibernation. It has been designed to work with PassMark BurnInTest but will also work with 3rd party applications. Sleeper allows you to:

Power management is an integral feature of most new computers. With laptops and wireless computing on the rise it is especially important to have strict control and reliability when it comes to your systems power states. Most modern computer systems support at least the following basic power states.

The system is fully on. Some devices may independently conserve power if their usage falls below a certain threshold.

The system seems as though it’s shut down. Power consumption is reduced to one of the three sleep levels (see below). The lower the level, the more power that is conserved, but the longer it takes for the system to wake. Mouse movement or key presses will usually wake the system.

Soft Off or Hibernate

The system appears to be off. Power consumption is very low. For a hibernate, the operating system context is saved out to disk and no longer exists in RAM. Wake up usually results in hardware boot, but not software boot.

No power consumption. A full reboot will be required to start up the system.

Sleeper allows the user to put the system into sleep state S1, S2, S3 or S4. To turn off or reboot the computer, see the Rebooter application also available from PassMark. Note that not all computer systems will support all power states. It is not unusual for just S1 and S4 to be supported or S1, S3 and S4. Attempting to put a system into an unsupported state results in the next lowest supported state being chosen.